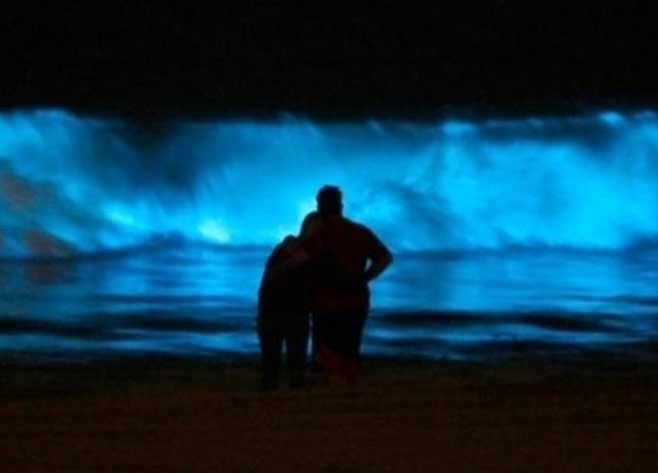 Southern California has been aglow with bioluminescent waves! What is bioluminescence, you ask? It’s a chemical reaction that produces light energy within an organism’s body, such as found in jellyfish, sea stars, and a variety of other sea creatures. Usually considered algae (marine plankton), dinoflagellates can occur in all aquatic environments. A rapid accumulation of certain dinoflagellates can result in a visible coloration of the water, colloquially known as red tide (which in some cases can cause poisoning if humans eat contaminated shellfish). Red tides can last up to a month, but scientists do not have enough data to predict when they will begin or when they will end. The biggest red tide events only occur once every several years.

So … got all that? This is quite the lesson in marine biology! Some dinoflagellates exhibit the aforementioned bioluminescence, primarily emitting blue-green light, and the waves appear to be glowing! This phenomenon recently captured the attention of many ocean enthusiasts from Los Angeles to Santa Barbara who broke quarantine rules to get a look!  Human beings are fascinated by the ocean, and I personally believe we came from the water. The ocean is respected for its strength, power, and the continuing revelations of beauty and mystery it offers. The best time to see the light show is a couple of hours after sunset, so keep that in mind next time around!