For New England Patriots fans like myself, Super Bowl LI on Feb. 5, 2017, was one of the greatest games in history (although admittedly, we wouldn’t have said that in the first half when the Atlanta Falcons were winning 28-3!).

Tom Brady may no longer be the Patriots quarterback, but his legacy lives on and the G.O.A.T. is now the focus of a sports comedy film starring Lily Tomlin, Jane Fonda, Rita Moreno and Sally Field. Yep, you heard it right — 80 for Brady stars some of your favorite octogenarian actresses, while the Diane Warren-penned theme song is performed by Dolly Parton, Belinda Carlisle, Cyndi Lauper, Gloria Estefan and Debbie Harry.

Inspired by a true story, the movie follows four fictional female friends who travel from Massachusetts to Houston on a trip of a lifetime to see Brady play in Super Bowl LI. Needless to say, the diehard Patriots fans get up to some shenanigans along the way, including meeting Brady himself, with then-teammates Rob Gronkowski, Danny Amendola and Julian Edelman (all playing themselves in a delightful Patriots reunion). The seven-time Super Bowl champion also co-produced 80 for Brady, which was directed by Kyle Haskins.

The film opens on February 3, two days before the fifth anniversary of that memorable Super Bowl. And if you don’t already know how the game itself ended, then we’re not going to spoil it for you!

Knock at the Cabin

If you’re a supernatural horror movie fan, then every M. Night Shyamalan movie is must-see viewing. Coming off the uneasy eeriness of Old, Shyamalan now launches us into full terror with Knock at the Cabin. Described as an “apocalyptic psychological thriller,” the film tells the story of a family of three who are vacationing in a remote cabin (which is always a bad idea!) when they’re suddenly held hostage by four strangers, who demand they sacrifice one of their own to save the world from certain doom.

Do Andrew and Eric (played by Ben Aldridge and Jonathan Groff) believe the intruders’ tales of the apocalypse? And even if they do, are they willing for themselves or daughter Wen (Kristen Cui) to die for the greater good?

Shyamalan said that Knock at the Cabin is the fastest script he’s ever written, but despite the rapidity of its production, it has been called his best work to date by viewers after preview screenings.

Based on a 2018 Paul G. Tremblay novel of the same name, it also stars WWE-alum and Guardians of the Galaxy actor Dave Bautista, and former Harry Potter star Rupert Grint (Ron Weasley in the iconic wizarding franchise) as two of the kidnappers.

Knock at the Cabin is released in theaters on February 3. 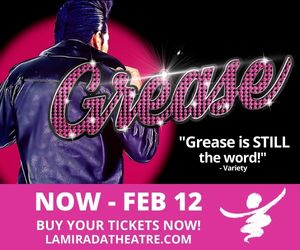 Be still our beating hearts. Just in time for Valentine’s Day, Magic Mike’s Last Dance, the third installment of the series, hits theaters on February 10 followed by a streaming release on HBO Max. Channing Tatum, star of the Magic Mike franchise promises dancing like they’ve never been able to do in the previous two films. Tatum says it will be the Super Bowl of stripping. Plot specifics are as skimpy as the dancer’s costumes. Previous cast member Adam Rodriguez is returning but sadly, no word on Alex Pettyfer, Matt Bomer, or Woody Harrelson. Selma Hayek(House of Gucci, Hitman’s Bodyguard) will be playing a central female character to Tatum’s Mike Lane character.

Magic Mike’s Last Dance is the story of Mike Lane, now an unemployed former roofer by day and stripper by night. Tatum first appeared in Magic Mike 10 years ago when his character ended up being the star of Kings of Tampa, a group of male strippers. The first movie (2012) was loosely based on Tatum’s own experience as an 18-year-old stripper in Tampa, Florida. It grossed more than $167 million worldwide. The sequel, Magic Mike XXL, premiered in 2015, leading the franchise to a London stage musical called Magic Mike Live and an HBO Max competition series Finding Magic Mike. With Last Dance, Tatum promises that viewers are sure to get their sexy, sizzling, stripper-filled fix!

Plane, Gerard Butler’s new blockbuster, is now playing in theaters. Directed by Jean-Francois Richet, the film stars Butler, Mike Colter, Tony Goldwyn, and Yoson An.Brodie Torrance (Butler), a former Royal Air Force pilot, is now a commercial airline pilot for Trailblazer Airlines Flight 119 from Singapore to Honolulu. His plane suffers damage in the air after a sudden lightning storm over the South China Sea and he has to land the plane in Jolo Island in the Philippines, a very hostile, war-torn island that has been taken over by dangerous separatists and militia. Most of the passengers are taken hostage when the plane lands.

To rescue the passengers, Brodie becomes allies with an onboard prisoner who has been accused of murdering Louis Gaspare (Colter). This is an action, adventure, mystery, and thriller that will keep you on the edge of your seat. Scarsdale (Goldwyn) is an ex-Special Forces Officer who is now a corporate crisis manager and fixer. He oversees rescuing the plane and passengers from a base in New York City. He knows that not even the Filipino Army will go to this island. Lives are being lost by the minute. This is about survival.  The really scary part about Plane is knowing a crash like this can actually happen and this why it keeps us anxious and engaged. I just hope Gerard Butler will be the one to rescue me!