On New Year’s Eve, only 17 days shy of her 100th birthday, the legendary Betty White passed away. She was an infallible star; how often can multiple generations say that about a cherished entertainer? A pioneer of early television with a career spanning seven decades, she made her first TV appearance in 1939 (when actual TVs and broadcasting technology were in their infancy). She was among the first women to exert control in front of and behind the camera and the first woman to produce a sitcom (Life with Elizabeth, 1953-55). In the 1960s, she was dubbed ‘The First Lady of Game Shows’ as she appeared regularly on Password, The Match Game, Tattletales, To Tell the Truth, I’ve Got a Secret, and The Hollywood Squares, among others.

She made her first appearance as Sue Ann Nivens on The Mary Tyler Moore Show in 1973. From 1985–92, she was Rose Nyland on The Golden Girls.From 2010–15, she was Elka Ostrovsky on Hot in Cleveland. White worked longer in television than anyone else in the medium, earning a Guinness World Record in 2018. She won eight Emmy Awards, countless others, and in 1995 she was inducted into the Television Hall of Fame. She made feature films, wrote books, and fought tirelessly for animal rights and protections. Betty … I kind of thought you’d never leave us. Thank you for being a friend. Rest well.

Meat on Ocean, a playful name for sure, invites guests to “meet on Ocean Avenue” for the best steak offerings in Santa Monica. Yes, I said it — the best I’ve tasted in a very long time. I was lucky enough to be invited to experience their fancy New Year’s Eve 4-course meal, so how could I refuse? I booked into the early-bird special seating at 4pm thinking it would be low-key and there would be less commotion. But it turned out to be quite festive and the best time, as it featured a bonus of the most spectacular sunset view I’ve seen in years. Simply divine. This was a fantastic way to end a challenging year.

The first course offered lump crab cake, jumbo shrimp cocktail, a charcuterie board, or an oyster sampler. Second course offered salads and a yummy clam chowder. We went with the amazing wedge salad with an abundance of bacon strips and crumbled blue cheese. Delicious. A meat lover’s dreams come true with third course offerings of several high-quality cuts of steak. Choosing between a classic “surf & turf” with an eight-ounce filet and South African lobster tail, 30-day aged bone-in NY strip, or prime ribeye, was no easy task. Somehow, we were able to figure it out! This dining experience exceeded my expectations – something that is very hard to do. Go!

Meat on Ocean is located at 1501 Ocean Avenue in Santa Monica. 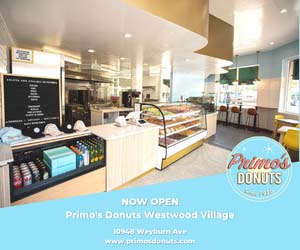 I have been a big fan of Primo’s Donuts since I arrived in Los Angeles. They are a genuine family-run business – there’s always a Primo in the house – and there’s always love in their donuts since 1956 when Ralph Sr. purchased the original Sepulveda shop on a whim. “We’ll run the business for a year build it up and then sell it!” he said back then. When I heard the iconic Stan’s Donuts in Westwood was closing, I was not surprised to hear that the Primo family decided to expand and take over the location. “We were so upset when we heard that Stan’s had decided to close its doors.  There aren’t many family-owned mom and pops like us left that bake donuts fresh every morning and we have always felt that we shared the same type of customers and vision for our businesses,” noted Ralph Sr. and Celia Primo. Turns out a new Primo generation is involved as grandson Nick is a UCLA graduate and has been involved with the opening of the new store.

In addition to their popular yeast and cake doughnuts, the Westwood location will have a full espresso bar and offer new items such as ice cream doughnut sandwiches.  My favorite is still the buttermilk bar which is covered in a dense white glaze while the donuts are still hot.  It simply melts in your mouth!

Season Two of Netflix’s Emily in Paris will not disappoint fans! The story picks up where it left off — Emily in a pickle due to a one-night stand with Gabriel (Lucas Bravo) and trying to save her friendship with Camille (Camille Razat). To help Lucas and Camille get back together, Emily starts dating Matthieu (Charles Martins) as a distraction and then begins a new relationship with Alfie (Lucien Laviscount) from her French class. In the meanwhile, Emily’s friend and roommate Mindy Chen (Ashley Park) steals every scene she’s in. She is an amazing singer and watching her storyline unfold is so much fun!

Emily’s boss Sylvie (Philippine Leroy-Beaulieu) is always one step ahead of everyone at the office. I love watching a woman of a certain age that is sexy and smart as she takes charge. Sylvie confronts Madeline (Kate Walsh) from the Chicago office that owns Savior. Madeline is a crass American who doesn’t understand Parisian values. We’ll see how Sylvie rolls with Madeline’s overbearing business manner. Along the way, there will be a lot of changes for everyone in the Savior office. For a total escape, great fashion, and the best of Paris, this is another fun season with another great cliffhanger! (No spoilers here. You’ll have to watch for yourself!) Darren Star has created a younger, more modern version of Sex and the City. Vive la France!