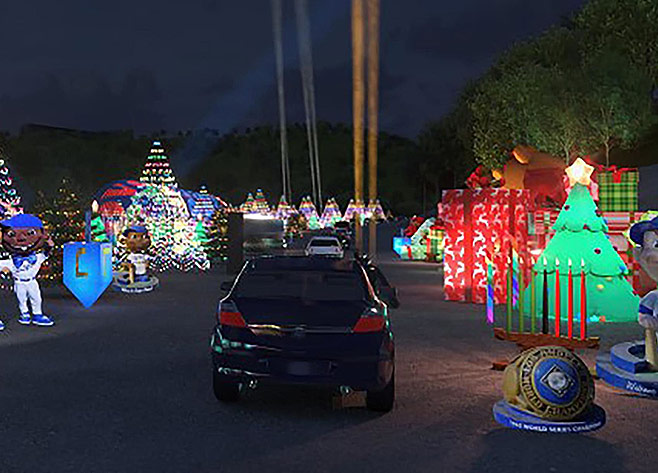 So, I’ve got some good news – and bad news.  The good news is our beloved LA Dodgers are 2020 World Champions!!  The bad news is… well there’s no parade… not going to happen this year anyway… hopefully sometime in 2021? In the meantime, however fans can celebrate the big win and the holidays at the Dodgers Holiday Festival!

This drive-thru experience has a little bit of everything to get you in the spirit starting off of course by paying homage to our beloved Champions, reminiscing some clutch moments and a montage of all of our favorite players!  The tunnels of lights are super cool to take a slow cruise through.  Definitely tune your radio upon entrance to enjoy the choreographed light show in the tunnels and throughout!  There are Hanukah displays, Kwansa, Christmas of course, sequined dancers and every inflatable imaginable.  I especially loved the Dodgers fire truck (pantone 294 of course) and vintage ice cream truck.  The Santa Force One has an awesome display and there is a certain jolly special guest at the end of the trip.

2020 has officially become the year of drive-thru events!  I recommend going to as many as you can – pack up the family – mask up and go!  Even Fido can come to the Holiday Festival – but you’ll have to keep your window up. 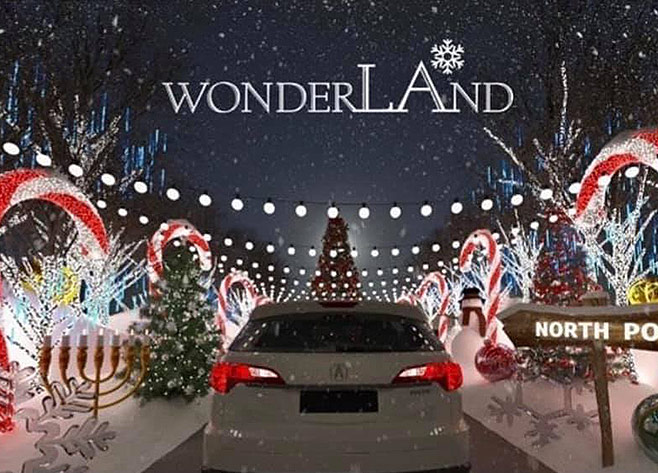 Drive-through events have become the new norm in 2020 —and if the production quality of Experiential Supply Co.’s  experiences are anything to go by, I can see them being here to stay. The team has followed up their spooky Halloween event, Haunt ‘Oween LA, with a Christmas extravaganza that is even bigger, better and brighter than its predecessor. The 1st Annual WonderLAnd holiday drive thru experience has taken over a space at Topanga Canyon Blvd. in Woodland Hills to bring some safe, socially-distanced Christmas spirit to this weird holiday season. Guests follow winding paths and glowing tunnels through snow-laden scenes featuring giant polar bears, playful penguins and complete snowman families as cool dance mixes of favorite holiday music plays in synch with the light shows. Even the helper elves are perfectly dressed for the part, donned in light-up facemasks as they guide cars around the route. The glittering installations unite traditions by including Hanukkah, Buddhist, Christian and global decorations. The elaborate sets, stunning costumes and overall attention to detail are really impressive, but what we most enjoyed were the Cirque du Soleil-esque performers spinning glowing hula hoops and batons. And of course, Santa and Mrs. Claus are there hard at work making presents in the workshop, and even have an elf drop a stuffed stocking into the trunk of every car as they leave. 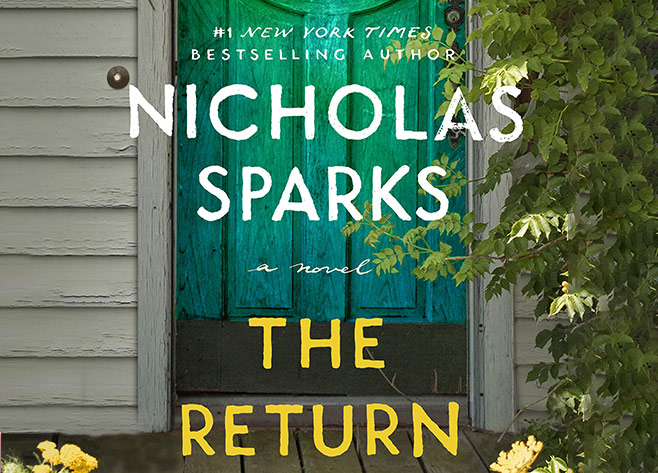 Author Nicholas Sparks is back with The Return, his 21st published novel. Every one of them has become a #1 New York Times best seller with over 105 million copies sold. Trevor Benson never intended to move back to New Bern, North Carolina until a mortar blast outside the hospital where he worked as an orthopedic surgeon sent him home from Afghanistan with devastating injuries. Preparing to return to medical school, Trevor isn’t expecting to fall in love with a local. Yet from their very first encounter, Trevor feels a connection with Natalie that he can’t ignore. She remains frustratingly distant, making him wonder what she might be hiding. In his quest to unravel Natalie’s secrets, Trevor will learn the true meaning of love and forgiveness. Sometimes in order to move forward we must return to the place where it all began. Nicholas Sparks and his Foundation are known for generous charitable contributions to his alma mater, Notre Dame, where he provides scholarships, internships, and annual fellowships. Sparks has a strong belief in giving back for the opportunities his full athletic scholarship to Notre Dame afforded him. There have been 11 film adaptations of Sparks’s previous novels including his best- known story The Notebook (which is currently being adapted into a musical). The Return promises to bring all the drama and romance we have come to expect from Nicholas Sparks’s work. 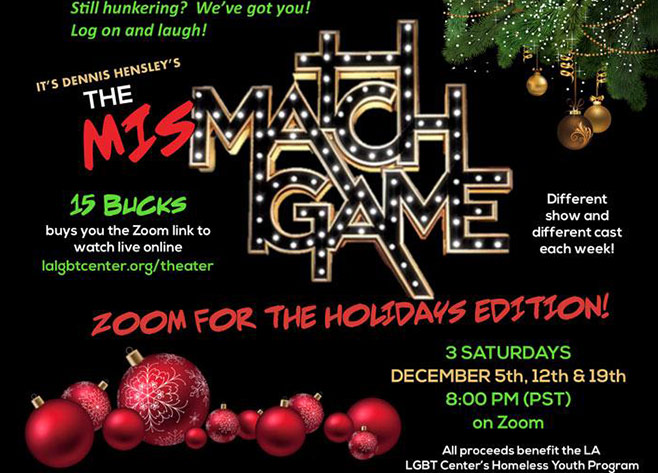 In non-covid times, The MisMatch Game is presented twice a year by the Los Angeles LGBT Center’s Lily Tomlin/Jane Wagner Cultural Arts Center and Dennis Hensley at the Renberg Theatre in Hollywood. Created and hosted by Hensley, the beloved, long-running comedy fundraiser went virtual back in September and was a great success! Now, The MisMatch Gameis set to return with a Zoom for the Holidays Edition on three Saturday evenings in December. Three panels of some of LA’s most creative, hilarious, and demented minds will deliver irreverent celebrity impersonations while improvising at warped speed. Performers scheduled to appear include Danny Casillas as Reba Areba, Drew Droege as Donald Sutherland, Tom Lenk as Tilda Swinton, Daniele Gaither as Wendy Williams, Felix Pire as Ricardo Montalbán, Jackie Beat as Bea Arthur, Marc Samuel as Morgan Freeman, Oscar Quintero as Kay Sedia, and many more. After its debut in 2004, The Advocate honored The MisMatch Game with a “10 Best Theatre” citation saying, “This recurring Los Angeles happening re-imagines the ‘70s TV game show The Match Game with full-camp and excellent sub-lebrity impersonations.” Net proceeds benefit the Center’s full range of free and low-cost programs and services. Over the past 16 years, The MisMatch Game has raised well over $160,000 for the LGBT Center. There will be gift card prizes for contestants chosen via lottery. Zoom link will be provided upon ticket purchase. Lots of laughter is guaranteed!