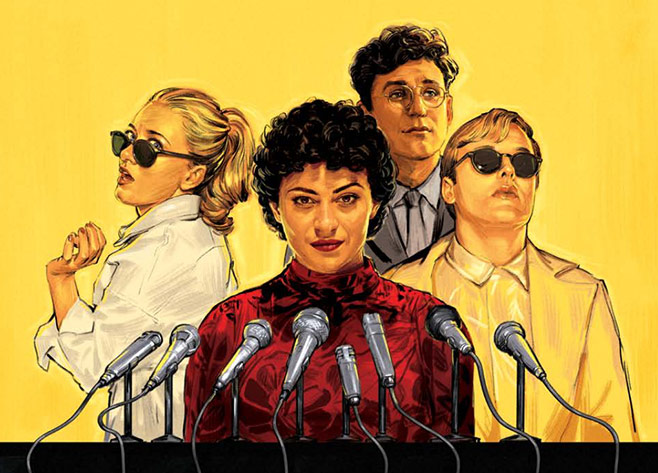 HBO Max has been out for about a month now. Have you been watching? Let me tell you: you’re missing out. One highlight from the streamer is Search Party, the ultra-funny black comedy that initially premiered on TBS for two seasons. The third season premiered last week, and you do not want to miss it.

Just to catch you guys up on the story: Dory (Alia Shawkat) is an aimless New Yorker with a dorky boyfriend (John Reynolds) and two best friends Elliott (John Early), a gay hipster, and Portia (Meredith Hagner) an actress. An old loose acquaintance from college goes missing, and suddenly Dory is on the case. What happened to Chantal? Who’s taken her? Her obsession turns deadly, and in season three, Dory is now charged with murder. As her world crumbles around her, so does her already flailing sanity. But remember, it’s a comedy! Ron Livingston (A Million Little Pieces), Judy Reyes (Scrubs), and Chloe Fineman (Saturday Night Live) also star.

The series was created by Sarah-Violet Bliss and Charles Rogers, their first mainstream credit. They were joined and mentored by Michael Showalter, is best remembered for his work on MTV’s The Slate and Netflix’s Wet Hot American Summer franchise. Since HBO Max’s acquiring of Search Party, all three seasons are now available to stream, and a fourth one has already been ordered.