Frieze Los Angeles fourth edition returns bigger than ever with ambitious activations, collaborations with nonprofit organizations, and pop-ups from some of Los Angeles ‘ most famed and beloved restaurants.

The fair’s new location at the Santa Monica Airport, will be held in the Southeast corner of the airfield and take place across multiple sites, including the Barker Hangar, allowing for an expanded footprint and a wider selection of galleries and collaborations with non-profit organizations, plus innovative art and ideas across all forms of creativity.

Focusing largely on contemporary art, Frieze Los Angeles celebrates the exceptionally dynamic culture of Los Angeles and its global contributions to the visual arts. Running from February 16-19, 2023, the fair will feature more than 120 of the world’s leading galleries from 22 countries around the globe, including new specialists in 20th century art and Frieze Projects.

A returning highlight feature is the fair’s much-celebrated section, Focus LA, which promises a hotbed of up-and-coming talent, from an ambitious installation of ceramics by Sophie Wahlquist to Edgar Ramirez’s visceral works reflecting on the dystopian fabric of the city.

An expanded Frieze Week program of exhibitions and events across the city will begin on February 13 and run throughout the fair encompassing a broad spectrum of programming at galleries, museums, civic organizations, and other artist-driven spaces, celebrating and showcasing the many communities which make up LA’s dynamic art landscape.

The Billboard Creative (TBC) brings art to the streets of Los Angeles with We The People, a new exhibition that turns billboard advertising spaces into an open-air exhibition for all Angelenos. Opening on February 3, 2023 and running until February 28, 2023, the exhibition will feature the work of 30 emerging and established artists working in a broad range of media including photography, painting, drawing, mixed media, and collage.

Founded in 2014, The Billboard Creative is a Los Angeles-based nonprofit that stages public art shows on billboards throughout Los Angeles with a mission to help emerging and undiscovered artists.

The exhibited works are selected through a curated, blind-submission process open to all and shown alongside a selected guest artist. This year’s guest artist is Los Angeles-based Bryan Ida.

“The urban setting has been part of the TBC story, with billboards spread through various neighborhoods all over Los Angeles,” said exhibition curator Mona Kuhn. “The works selected for this exhibition encompass stories of emotions, conceived, and narrated thru the vision and the works of artists.  Each work presents a fine balance between joy and vulnerability, embracing all the nuances of the human soul. In diversity we find strength. It is in the streets that we find this dynamic coexistence, and the billboards become the perfect platform to reflect this vibrant reality.”

For a map to the art and more, click here. 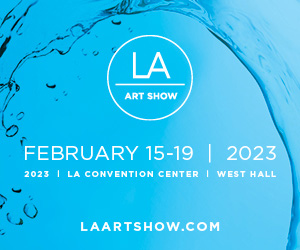 “The whole point of taking pictures is so that you don’t have to explain things with words.” – Elliott Erwitt

Photography is the only global language that can speak to you no matter who you are, whatever language you speak, literate, or illiterate. Photographs can amaze, inspire, report, and bring the world to us. They can make time stand still, capture something that happens in seconds, and will never happen again in exactly the same way. A beautiful photo can make the ordinary look extraordinary, a juicy sliced lemon, a steaming cup of coffee things we see every day but never really “see”.

On Saturday February 18 and Sunday February 19, 2023 come and experience the world through the eye of both vintage and contemporary photographers at the inaugural opening of Photo Forward Los Angeles at the Danziger Gallery, Bergamot Station Arts Center.

The introduction of this new art fair in Los Angeles is consistent with The Photographic Arts Council of Los Angeles mission to further an evolving and public conversation about photography and lens-based arts. The free art fair will offer an expansive exhibition of photography, books, and ephemera, presented by exhibitors established in their field. Participants were selected based on the diversity of their curatorial focus and their engagement with historical and contemporary representations of the medium. Works presented are priced in a range for beginning to advanced collectors.

The Romance of the Rose

To be honest, I am not a big opera fan but this line from the press release for the Long Beach Opera’s newest production was simply irresistible: “The Romance of the Rose freely beguiles, charms and terrifies with no moral allegiances or moral compass and promises to lead audiences thrillingly astray.” Clearly this is not your traditional opera rather a groundbreaking new work that defies definition and must be seen.

Kate Soper, the composer/librettist, describes the work as an “operatic exploration of the ways in which love, sex and music wreak havoc on our sense of self.”  The opera is based on a medieval poem recounting the dream of a young man who falls hopelessly in love with and tries to win Rose both the name of his beloved and the abstract symbol of femininity.  I was also intrigued by the unusual cast of characters: The Dreamer; Shame, Lady Reason, Idleness, The Love, Pleasure and The God of Love.

Soper returns to the LBO following her celebrated Voices from the Killing Jar presented in 2021.  Her music has always defied tradition and definition.  The Romance of the Rose blends operatic comedy and adventure with a score that envelops the theater in new and exciting ways.   In addition, the opera will inhabit multiple spaces within the historic art deco Warner Grand Theatre with unique settings designed by LBO Artistic Director James Darrah.