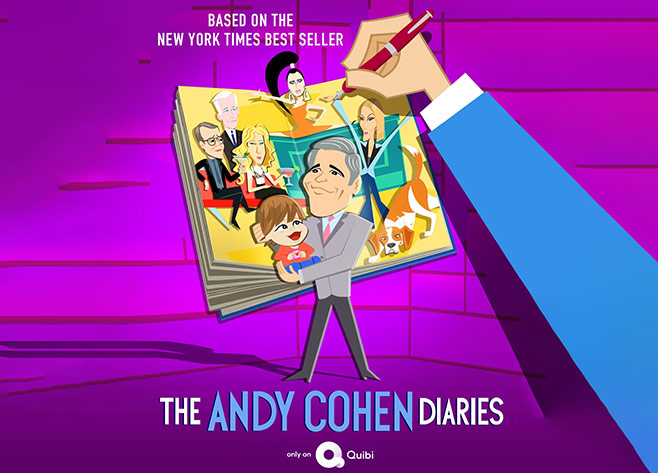 The Andy Cohen Diaries only on Quibi

Who would’ve thought that TV would amp up more series, rather than slow down, during a global pandemic. Bless the networks (and Quibi) for keeping us entertained (and us writers busy). Quibi is not owned or managed by a network like Peacock or HBO Max, nor is it exactly a streamer. It’s a mobile based app where the user can watch feature-length films and network-length series in increments of six minute clips. Some are hits, some are misses, as with everything else in entertainment. And I won’t be reviewing the company, yet they do once in a while put out something ideal for their concept.

The Andy Cohen Diaries, now on Quibi, is an animated comedy series following the wacky life of the Watch What Happens Live host. Each episode is ripped from Cohen’s diary, and include the very fun and absolutely ridiculous stuff the TV host gets involved in. In one episode, Cohen accidentally lets one rip while interviewing a Grammy winning singer. In another more serious-toned episode, Cohen nabs the first post-interview with former Housewife Teresa Guidice and her husband, Joe. One episode, titled “Ben Breaks the Internet,” follows a day in the life of Ben, Cohen’s son.The series was created and developed by Cohen, who also serves as executive producer and writer.