The work of legendary artist Frida Kahlo is instantly recognizable so I was not surprised to receive news of an immersive exhibit in her honor.  Though it was created by the people responsible for last year’s brilliant Van Gogh Immersive, this exhibit is different as it feels like you are stepping into her world and her life as you discover the people, events, and obstacles that made her the extraordinary woman and artist she was. It’s almost like the dramatic brushstrokes in each painting bring the artist’s world to life.

The Mexican-born Kahlo was married to famed muralist and painter Diego Rivera. Sadly, she lived in Diego’s shadow in the art world during her lifetime though time has brought her the recognition she richly deserves.  Kahlo was plagued with physical ailments most from a serious bus accident.   Her right leg was amputated and she was frequently bedridden. Hence, she was often the subject/model of her paintings (one third of her paintings were self-portraits) seeming to explore her identity and pain through her artwork. Her work has been described as magic realism though she said, “I don’t paint dreams or nightmares, I paint my own reality.”

Her bold iconic works have now become a symbol of female empowerment that lends itself to the large-scale projections, state-of-the-art technology and the powerful musical score that compose this 360-degree experience in the Lighthouse Immersive Gallery.

Before it was the vibrant city we know, Los Angeles was underwater for over 90 million years. Explore the underwater realm of ancient Los Angeles when much of the L.A. area was submerged beneath the waves of the prehistoric Pacific Ocean at the Natural History Museum ’s L.A. Underwater: The Prehistoric Sea Beneath Us.

Dive into this multimedia-rich immersive exhibition and discover L.A.’s prehistoric past through the stories of nearly 40 fossils that are uncovering the secrets of our submerged prehistory. Visitors will view rare fossils from across the L.A. region and encounter huge cinematic elements showcasing sharks the size of school buses, glowing deep-sea fish, giant tuskless walruses, a 10-million-year-old whale skull discovered in Lincoln Heights, a 10–50,000-year-old saber-toothed cat skull and other awe-inspiring species that roamed ancient L.A. Many of these fossils were found by everyday Angelenos—from construction workers building the Metro line to discoveries in local neighborhoods by Museum visitors.

Lori Bettison-Varga, NHMLAC President and Director said, “With L.A. Underwater, we are giving visitors an in-depth look at the Southern California region, millions of years before humans set foot anywhere near Los Angeles. Through NHM’s commitment to discovering the natural world in our own neighborhood and this exhibition’s focus on our extensive marine collections, we continue to shape our understanding of the ancient past as well as inform current and future discoveries.” 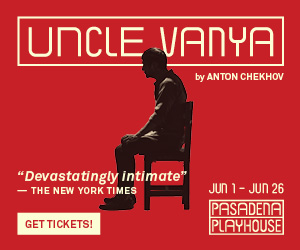 The Montana Avenue Merchants Association unveils the Tree Art & Light Installation along ten blocks of the business district. One tree on each block has been transformed into a unique illuminated work of art. The project aims to support the economic recovery of the area in the wake of ongoing challenges brought on by the COVID-19 pandemic.

The designs adorn the branches and canopy of the trees and range from whimsical butterflies and flowers, to hanging lanterns, chandeliers and colored panes. The installation will be on view and illuminating the street through September 2022. As businesses fully reopen and welcome residents, shoppers and visitors back to Montana Avenue, we envision this public art project to be a focal point that draws people in,” said Montana Avenue Merchants Association Chair Kara Taub. “We hope the installation encourages people to walk and explore new businesses that have recently opened or rediscover long-standing neighborhood favorites.”

The project is funded in part through the City of Santa Monica’s Art of Recovery initiative which, since its launch in 2020, has funded artists and organizations to transform some of the City’s most iconic landmarks and public spaces into vibrant works of art to aid in the City’s recovery. The Montana Avenue Merchants Association is one of six partners working with the initiative as part of the City’s efforts to expand the production of art projects and events throughout the City.

Takashi Murakami’s expansive artistic universe will be on view in Takashi Murakami: Stepping on the Tail of a Rainbow, the artist’s first solo exhibition at The Broad. One of the most visible and important Japanese artists working today, Murakami’s influence on Japan rivals Andy Warhol’s on the United States.

The exhibition, which includes all of Murakami’s works in the Broad collection and key loans, features 18 works created throughout his career and new immersive environments developed in tandem with the artist and his studio, Kaikai Kiki Co., Ltd. In these works, spanning sculpture, painting, wallpaper, and immersive installations, the artist explores subject matter such as globalization, postwar Japan , pop culture, and religious iconography.

This Is Not America ’s Flag, is special exhibition featuring over twenty artists, spotlighting the myriad ways artists explore the symbol of the flag of the United States of America.

It was developed conceptually in the summer of 2020 during the groundswell of activism for racial justice in the wake of the murders of George Floyd, Ahmaud Arbery, and Breonna Taylor and was inspired by two works in the Broad collection, Flag (1967) by Jasper Johns and African-American Flag (1990) by David Hammons. The exhibition includes works that both embrace the flag as the signifier of the nation and its ideals and subvert it to express injustices and inequities woven into the fabric of the U.S., past and present.